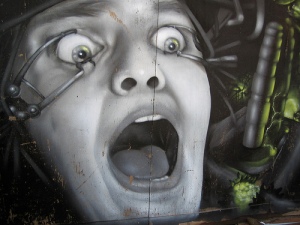 In life, we are full of standards.

We should dress appropriately for the occasion.  Uniformed personnel require certain standards of dress and conduct.  Military standards are rigorous to the extreme.  Even fast food must live to certain criteria; if the special sauce is missing, then it’s no Big Mac, just another fatty sandwich.

As educators, we also have standards that dictate who we are and what we do.  As rebellious as I can be, I actually like standards.  They provide a basic body of requirements that all teachers should strive for in their classrooms.  They protect teachers and students from missing out on a full education.  Finally, standards help students, teachers and parents set goals and benchmarks to meet that student’s learning needs.

However, there’s a fine line between comprehensive standards and strapping a kid to that Clockwork Orange learning machine.  The New York City Department of Education Social Studies Scope and Sequence for Grades K-8 may swing more toward the latter.  Its goals and intentions are great, and the scaffolding of early grades is phenomenal.  Yet grades 5-8 can only work if every droogie in the public school system gets strapped to one of these things and becomes a Yale history professor.

The opening statement has much to admire.  “Social Studies is the integrated study of history, geography, economics, government and civics. More importantly it is the study of humanity, of people and events that individually and collectively have affected the world.”   I couldn’t agree more.  The study of humans, the story of us–that is what the social studies are about.  Furthermore, students today have the most superficial grasp of our history.  Even time is an issue; I still get students who think that the Founding Fathers are still alive–except for Hamilton, who “got snuffed.”

Page 17 of this document, though, provides with one of the true problems of this program.  Up until 5th grade, the curriculum has been about building up students research, reasoning and writing while slowly including actual historical content.  5th through 8th grade was obviously bought at Home Depot–the kitchen sink included.

One problem is the 5th grade state test in November.  That means Unit One on Geography, scheduled for September/October, is out the window because that’s when the students are trying to cram everything they forgot in 4th grade.  Well, GPS can take care of that, right?  Now let’s see–November.  The United States.  The whole damn thing.  Everything from the Natives crossing over the land bridge in Alaska to Lee’s surrender to everything in between.  In one month.  By the way, I usually stay on this topic all year.  Call me crazy, but Native Americans alone takes up a month and a half.  I think next time I’ll condense all of U.S. history to a baseball stat card with wins/losses, on-base percentages, etc.  The Iroquois gave up a lot of earned runs in 1779.  Too bad the Confederacy did its best stats before free agency.

If that’s not enough, the rest of the year is taken up with the rest of the hemisphere, which the Department of Education (DOE) thinks of as America’s asterisk.  Two months are devoted to Latin America–the whole thing.  This covers everything from the Mayans to Eva Peron.  Students can produce a decent timeline of coups and juntas that look very nice on a bulletin board.  El Salvador’s is particularly useful.  If a student does the Argentine military juntas of the 70’s, remind him/her that dropping a Communist from a plane is not the best diorama subject.

Next up is Canada, from February to April.  Isn’t this a disordinately long time to dwell on our neighbor to the north?  I can usually end this in a week and a half–Canada was offered to join the Revolution, they didn’t, they played nice with the British Empire and were rewarded with a freezing cold federation of wacky right-wing nuts out west and a separatist Francophone population back east with an extension of Michigan in the middle.

Canadians do have hockey, a good point of entry for those students with behavior problems.  Show a class the grinning toothless wonders of the 1960 Montreal Canadiens and just see if that kid flings a ruler again.  If that doesn’t work, call the NHL to see if Bobby Clarke or Mike Milbury can scare your kids straight with a stiff crosscheck to the gut, or a good beating with his own overpriced Nike hightop.

6th grade isn’t much better.  Again with the hemisphere theme, this time on early civlizations of the Eastern hemisphere, which covers everything from Portugal to New Zealand.  I’d love to see the papers out of this class: Spartacus leads a revolt of Maoris, Ashanti and Gauls against the Ch’in Dynasty with the help of early Mesopotamians.   Their battle plan was whatever they remember from watching  300 for the umpteenth time on cable.

All of this is, of course, to be forgotten as 7th and 8th grades provide the United States depth and detail you needed in 5th grade.  You can picture that 8th grader now, thinking, “Thank God Mr. D stopped our U.S. history cold in December so we can cram about Fidel Castro and Gordie Howe.  That’s really useful for our U.S. history exam coming up.”  (flips finger in my direction)

To be fair, I’m familiar with a few of the creators of this plan, and they did the best they could under the circumstances.  The problem is that you may want students to know everything about something.  However, that student will have so many things in their head at the same time that the Teapot Dome Scandal and the Battle of Thermoplyae may be fighting for space with reading comprehension strategies and Pythagora‘s Theorem.  They shouldn’t–since social studies requires reading and math–but it happens, especially in upper grades where compartmentalization is still the norm.

Don’t look to me for an answer, either.  These standards will probably be tweaked over time, to be sure.  Hell, you don’t want me designing a curriculum anyway.  It’ll probably include the Draft Riots of 1863, methods of medieval torture, a study of Fijian dining habits with roast Caucasian and a history of the NCAA basketball tournament.

And not necessarily in that order.