Hollywood and History: the perils of film in the history classroom 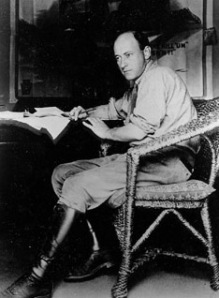 Hollywood is truly the serial rapist of history–and it doesn’t use protection.  Ask my friend here, the great film director Cecil B. DeMille.  His record of historical rape could make you reach for a sharp object.  It would make the real-life Moses reach for a firearm, without Chuck Heston having to spot his NRA card.

Like a serial rapist, Hollywood writers and directors seduce certain types, be it war heros, flawed minorities or enigmatic outsiders.  After gaining their confidence, they force their will on them–sappy plotlines, out-of-place romances, needless sidekicks, and set pieces that have nothing to do with reality.  After the rapists have had their fun, they make a point to display to the world how they humiliated these poor saps.  The result is reams of celluloid and digital memory cards of pseudo-historical nonsense.

Yet students today are obsessed with movies; they even read history like a storyboard at Miramax.  I make it a point to find movies that can augment lessons wherever I can.  Yet it is difficult to sort out the gold from the garbage.  You don’t want to spread Hollywood lies, but  history can often grind at a snails pace without special effects and a Hans Zimmer score.

Recently, I tied the Civil War to our local communities by spending a lot of time on the 1863 Draft Riots, the anti-war, anti-draft and anti-black violence that erupted in Manhattan in the week after Gettysburg.  It would have been great to have a movie with this, but my choices were both extremely flawed.  I had Ric Burns’ New York: A Documentary History (1999) which covers the riots very well but in that slow, schmaltzy Burns style that puts kids to sleep.  I also had a real problem piece, Gangs of New York (2002), a disappointing film that has so many flaws too numerous to count, particularly since half a century of Five Points lore is squeezed into a few months in 1863.

I chose the documentary, and my students were not happy.  “Gangs” had a great violent scene about the riots, too.  I really didn’t mind the gratuitous violence.  What I did mind was the ridiculous preparation for a gang fight, where each gang is wearing similar colors and clothes–as if gangsters actually color-coordinated for the occasion.  That whole thing looked like a scene from The Warriors if it took place at Colonial Williamsburg.  So tough, the kids had to learn–and this time, it was boring.

In order to not get caught in a similar situation–and to save my fellow teachers in the neighborhood some grief–here are some flicks to avoid and some that can be used with the right lesson:

300 (2006) – NEVER use a movie that’s a retread of a comic book about a historical event.  This tasteless, unnecessary farce about the Spartan defense against the Persians at Thermoplyae in 480 BC has as much value as Hannah Montana.  Real Spartans would have made mincemeat of these bozos.  The Persians look like the villians in a Scientology cartoon.  Just thinking about this garbage makes me want to impale someone.

The Patriot (2000) – This one loses out on a number of counts.  The main character, Benjamin Martin, is a composite of three actual guerrilla fighters of the American Revolution, none of them nearly as virtuous as Martin.  The battle scenes, though life-like and action-packed, fall into gratuitous segments that only a self-loathing ultra-Catholic can bestow–like the guy getting his head ripped off by a cannon ball.  And what’s with the pussy-footing around the slavery question?  He’s a planter…in SOUTH CAROLINA…if he had no slaves, I assure you nothing would have gotten done.

Pearl Harbor (2001) – World War II never looked so precious.  Or clean, for that matter.  Yes, the special effects are worth seeing, especially if you have a great home theater system.  But it is yet another rape by the Hollywood establishment.  I’s see, the Japanese are sent home by the determined downtrodden sailor of color who weeps at his captain’s death as if he’s on the plantation.  Throw in a couple of good-looking all-American lads in Hawaiian shirts–both of whom are tipsy for the same gal–and you have the recipe for a massive distortion of the facts.

Gone With The Wind (1939) – Don’t get me wrong, this is a great movie…possibly among the greatest movies.  It was a classic, and continues to be a classic today.  Nonetheless, don’t use GWTW in the classroom as history: the story doesn’t even try to be accurate.  It’s also too long–your kids will be heaving a brick at you after the eleventh “fiddle dee dee” or so, which coincides with Clark Gables umpteenth smirk.

Any Biblical epic from the 1950s and 1960s, including C.B.’s old beauties Samson and Delilah (1949) and The Ten Commandments (1956), William Wyler’s Ben-Hur (1959) and Nicholas Ray’s King of Kings (1961) – Besides treading on the First Amendment, these fun films were not meant to show the ancient world as it was, but rather as Hollywood thought it should be.

Gettysburg (1993) – Perfectly suited for a classroom.  The film uses actual Civil War reenactors that are fastidious in their accuracy.  The violence is of the PG kind, which makes it classroom-suitable without being wuss-like.  Finally, who can find a better hero for kids than Col. Joshua L. Chamberlain charging his 20th Maine down Little Round Top?  It still makes me cry.

Glory (1989) – Another Civil War classic, Glory is a great film both because of its action and its unflinching honesty about racism on both sides of the war.  The whole film is really a ball of tensions and antagonisms that culminate in one brave futile charge on Fort Wagner, South Carolina.  Two talking points for the class–the relationship between the northern Boston black man and Denzel Washington’s runaway, as well as the Irish drill sergeant (“Oh look at this, Bonnie Prince Charlie! Are you a gentleman? Are you a member of Congress or something? Or are you the bloody Prince of Africa?”). He’s still a riot.

John Adams (2008) – This sweeping HBO miniseries is somewhat uneven, but the defining moments of this series are its first two episodes, which deal with the period from the Boston Massacre to the adoption of the Declaration of Independence.  Get the students to focus on the Preston trial, the trial of the soldiers involved in the massacre.  It opens up great discussions about justice, fairness, the use of violence, etc.

Gandhi (1982) – This is a film as big as India itself, and often as complicated.  Be VERY careful when using this movie, and be selective in the scenes you show–don’t worry, there’s lots of good material to choose from.  Definitely use the Amritsar massacre of 1919, as well as Gandhi’s march to the sea to make salt.  When it comes to more modern subjects, the authenticity of the background, costumes, etc. is not the issue, but rather the events themselves.  The scene where the Muslim and Hindu refugees get into a melee across the border is one example of this.  The film works because it sets a mood, a tone, that reflects the important events of the period.

The Right Stuff (1983) – This is similar to Gandhi in that it works best as setting a tone for an era–in this case, the beginnings of the space race in the late 1950’s and early 1960’s.  Although it is long, the film is worth seeing, especially if you tie science lessons on space, rocketry, aerodynamics.  I would see this film in two shifts: focus first on the early jet pilots and test pilots after World War II, then look at the Mercury astronauts.  Note similarities and differences between them, especially their media attention.

This list is by no means exhaustive, so any other suggestions and comments are welcome.  At the very least, you can kill time on a Friday when actual work is the last thing on your mind.

5 responses to “Hollywood and History: the perils of film in the history classroom”