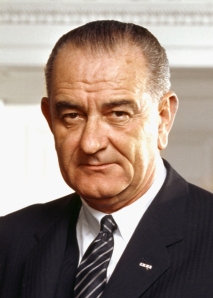 The Neighborhood today honors a President that has provided more legislation, more controversy, and more belly laughs than many other chief executives in our history.

Happy Birthday to Lyndon Johnson (1908-1973), 36th President of the United States.  LBJ was a lot of things–a high school teacher, a Congressman and Senator who powered his way into prominence, Vice-President and then President.  He was not an easy man to figure out, either.  He was a vestige of the “Solid South”, the Democratic bloc of White Southerners that were for the New Deal but against desegregation.  Yet ever the wheeler-dealer, Johnson worked (brutally, at times) to get legislation passed in many areas, including civil rights, health care, welfare, and space exploration.

Under his guidance, the Civil Rights Act of 1964 and the Voting Rights Act of 1965 became a reality–even though he had to make it look like Martin Luther King forced him to do it, in order to save face.  The Great Society, a massive expansion of the federal government, included a slew of programs both white and black Americans use today: Medicare, Medicaid, food stamps, etc.

LBJ wanted the Great Society to be his legacy.  Yet a thin little country in Southeast Asia will forever define his presidency.  Starting in 1964 with the Gulf of Tonkin Resolution, the Johnson Administration deployed more and more troops to the Vietnam conflict.  By 1968, Johnson’s popularity was so low that he retired from politics rather than suffer the humiliation of an almost certain defeat in the next election.

The LBJ I love, however, is the casual Texan who cusses and laughs and cracks off-color humor.  I’m ending today’s post with a link to one of Johnson’s most famous phone calls.  On August 9, 1964, LBJ calls up the Haggar clothing company in Houston to order some pants.  I’m still amazed that the salespeople on the other end could keep a straight face.  It’s linked below:

I’d love to know if anyone else has ever described a tight inseam as “riding a wire fence.”