Where the Environment Matters: the legacy of the Milton Hershey School 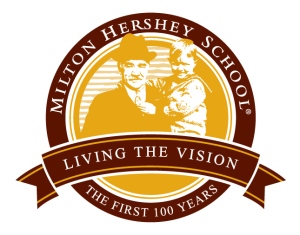 Sometimes those ideals that have been ignored for years can still work—in spite of efforts to undermine them.

I was privileged to attend a screening of Academy Award-winning documentary filmmaker Cynthia Wade’s newest film, a documentary about the Milton Hershey School.  The film, at least partially, proved two things for me: (a) there are people in corporate America who actually care; and (b) the old-fashioned way can still work in education.

MHS is a PreK-12 school for underprivileged children in Hershey, Pennsylvania, just across the street from Hershey Park.  Milton Hershey, the founder of the Hershey chocolate empire, and his wife founded the school in 1909.  Since they were unable to have children, the Hersheys founded a school where children in desperate economic or family situations can learn and grow in a safe nurturing environment.

The school is comprised of over 1800 students sprawled across buildings throughout the town.  The school is funded by the Hershey Trust Company, which owns the controlling shares of stock in the Hershey Company.  This is particularly helpful when similar ventures are struggling due to lack of funds: it’s nice when a school has a blue-chip company for a piggy bank.

Regardless of these resources, MHS does not pride itself on its riches, but rather its people.  The core of their philosophy is the house parenting system.  Students who enroll in MHS live in single-gender family houses run by house parents.  These parents act as the authority figures these children often lack: chores are done strictly, discipline is assertive and effective, and studies are monitored rigorously.  Furthermore, these parents are the students’ principle cheerleaders and advocates: they form a liaison with the school and their biological/legal guardians, to ensure the best interests of the children are met.

As I was watching the film, the emphasis was almost exclusively on the house parents and the student house system.  As interesting as it was, I was a little skeptical.  This is an academic institution, after all.  I didn’t see a whole lot of teaching.  Yet when the scenes in the classroom did appear, I was astonished.

Students were not in guided reading groups, but in rows.

No mandated time for this or that, as far as I could see.

Milton Hershey School teaches a valuable lesson.  Theories don’t work unless children feel safe and secure in their home environment.  MHS doesn’t need Teachers College or Bank Street to tell them what to do.  As long as the home environment is monitored and nurtured, it doesn’t matter what pedagogy or curriculum design you use.

To say Milton Hershey School is a success story is a severe understatement.  According to MHS, 90% of their graduates go on to some form of higher education.  MHS graduates have gone on to become CEOs, entrepreneurs, doctors, lawyers, even high ranking officers in our armed forces.  I also had the pleasure of meeting some MHS students at the screening.  If these kids came from troubled homes, it sure didn’t show.  The alumni assembled look like a gathering of Ivy League swells: there’s not even a hint that these successful people were once in desperate situations.

The biggest concern is that the fruits of the MHS experiment seem lost on the grand poobahs of education.  To them, the opposite is true: the teacher makes the student, regardless of their background.  Simply train the teacher better in the newest theories—not necessarily the best ones—and that teacher can work miracles.  This is the thinking behind a lot of the methods coming out of the large schools of education.

What’s more frightening is that the wrong people, the people in power, take these theories seriously.

Public school teachers must deal with children as they come, with whatever baggage they take from their home life.  As such, teachers have to adjust their practice in order to connect to children that see the school as the only real form of structure in their life.  This is where the theories come in: it places the onus on the teacher almost exclusively since it is assumed nothing is provided at home.  The public school does not have the luxury of altering the environment of children as MHS does.

Yet if the MHS experiment shows the value of a stable home life, regardless of the academic theories or methods used in the classroom, shouldn’t there be some effort on the part of school districts to help smooth out the rough edges of these kids’ lives?

The MHS experience shows how environment matters.  Districts across America should use this example and reach out more to families and homes–and work with teachers as a partner, not as miracle workers.  Many community programs exist that help parents to become successful along with their children.  These programs provide a huge help in changing what in many public schools is another intangible obstacle.

Milton Hershey School is a place that’s going in the right direction.  More administrators in this country should take its example–and less from the academics who seem to go in every direction.

For more information about the school, visit http://www.mhs-pa.org

One response to “Where the Environment Matters: the legacy of the Milton Hershey School”