This Day in History 12/2: The Coronation of Napoleon Bonaparte 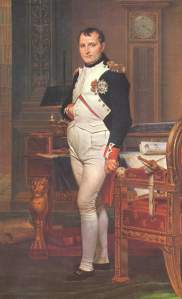 Since my last post was mired in the bullshit of educational minutia, maybe it’s best that today we focus on an event when the BS was finally swept away.

On December 2, 1804, Napoleon Bonaparte, general extraordinaire, First Consul of the French Republic, and essentially the dictator of France, decided to call a spade a spade and give himself a crown.  In front of a packed Notre Dame Cathedral in Paris, with the pope waiting anxiously, the diminutive little tyrant took a crown and placed it on his own head, naming himself Napoleon I, Emperor of the French.

In reality, the guy was basically a monarch for quite a while now.  The French Republic had been moribund until Napoleon led a coup d’etat in 1799 that swept away the Directory government and created the French Consulate, with himself as First Consul.  The French Constitution was rewritten several times until 1802, when the French legislature voted to make Napoleon Consul for life.  He ruled as an autocrat, pushing the revolutionary ideals of France’s liberals, while at the same time squashing popular dissent and political discussion.

By 1804, he figured that the charade was over–let’s just declare a monarchy now and dump this Republic crap.  Yet Napoleon was also careful.  He made sure that he was named Emperor of the French people–NOT France the territory as earlier kings had done.  The machinations of legislative processes were maintained, albeit under the Little Corporal’s heavy hand.  He essentially became what he needed to become: all-powerful with the veneer of popular support.

In truth, I kind of admire the little prick.  He deftly utilized public opinion and constitutional niceties to achieve absolute power.  Yet he had to go mess with the Spanish and the Russians–two groups with which you shouldn’t get into a knife fight.  Some people just learn the hard way.