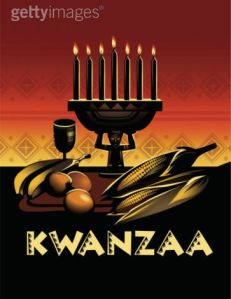 In Barack Obama’s America, is Kwanzaa relevant anymore?  At least in the South Bronx, Kwanzaa is dying, if not dead already.

If you want a good gauge as to the state of a community, poll a classroom to see if any families still celebrate this holiday.  Before the recess, I polled some students.  In a room where, despite the majority Hispanic status, almost everyone has some African ancestry in them, only one family celebrated Kwanzaa.

The Latino families obviously had Christmas as the higher priority—it also had the better haul of presents.  First-generation African immigrants, understandably, were confused about celebrating a heritage they took as a given.  Yet even among black American families, Kwanzaa has diminished in importance.

The decline can be felt everywhere, as seen in a recent Associated Press article.  According to Keith Mayes, an assistant professor of African American & African Studies at the University of Minnesota, Kwanzaa participation has leveled off.  In a population of almost 40 million identified as Black by the US Census—including multiracial Americans—only about half a million to 2 million people celebrate the holiday.

Even the President, Barack Obama, doesn’t celebrate Kwanzaa—and it’s hard to get more African than him.

Why the decline?  And if Kwanzaa is in such decline, do African-Americans find any relevance in the holiday anymore?

If you’re not African-American—and I’m not—Kwanzaa is often too quickly dismissed as a “pseudo-holiday.”  I’ve looked at these false-festivals when it comes to education.  Kwanzaa, at least on the surface, bears all the unfortunate markings of a pseudo-holiday:

(1)    It has a definite founding date and founder – no mystery like in Christmas, no fudging with lunar calendars as in Chanukah.  Ron Karenga, a professor at California State University, Long Beach, founded Kwanzaa in 1966 to celebrate African heritage and culture.

(2)    The underpinnings are dubious – Karenga based his holiday on a Pan-African philosophy combined with 1960’s Marxism, a philosophy not entirely African.  He also used Swahili as the base language for ritual: a language from East Africa that almost none of the original descendants of African Americans probably spoke at all.

(3)    The rituals seem too much like existing rituals – the kinara, the seven-candled candlestick that symbolizes Kwanzaa, is a ritual that borrows much (a little too much) from Chanukah.

(4)    It was founded in reaction to established holidays – although not so much the case today, Kwanzaa was founded, according to Karenga, as a direct assault on Christmas, which was seen as a white holiday.  Karenga even alleged Jesus was “psychotic.”  Today, most Kwanzaa celebrants participate in the holiday in addition to established winter holidays such as Christmas.

(5)    It is not a legal holiday, at least in the United States – nor is there any attempt to even make it a holiday.  If Barack Obama isn’t lifting a finger for Kwanzaa, then forget it.

So Kwanzaa has a pretty spotty record as a holiday.  This doesn’t really concern me much.  Christmas wasn’t exactly a hoot in the first century, when raping a bull for Jupiter and bathing in ox semen was considered a religious rite.  Let’s not get started on Chanukah again, or its constant gamesmanship with Christmas.   If Wall Street had its way, Thanksgiving would be moved to December 26, to create an extra-long shopping season.

However, the “pseudo” aspect of the holiday can account for its decline.  The holiday was created at the height of the 1960s, when identity politics first came to the fore.  The slow progress of the civil rights movement frustrated many groups, pushing them to radicalize their politics into a more self-conscious and empowering framework.  It was Crayola politics at its best: African-Americans drifted towards Black Power and Pan-Africanism.  Chicanos and other Hispanics turned to Brown Power.  Native Americans started radical groups like the American Indian Movement (AIM).

These movements, for the most part, combined a racial or ethnic consciousness with a Marxist economic and social agenda.  The principles of Kwanzaa were framed thus, and so racial empowerment were somehow tied to loopy economic theory.  It’s unfortunate because most of the Kwanzaa principles are ideals all people should hold, such as Unity, Self-Determination, Responsibility, and so forth.

The real Achilles’ heel for Kwanzaa  is among two of these principles.  One is Self-Determination, or Kujichagulia in Swahili.  According to Karenga, Self-Determination means “to define ourselves, name ourselves, create for ourselves, and speak for ourselves.”  In it of itself, this is not that controversial—in fact it is almost liberating.  However, does Karenga really mean for Blacks in America to define themselves, or accept the definition that others see fit?   Many African Americans, while embracing and celebrating their African heritage, do not necessarily identify as such, but rather as Americans first.

African immigrants are even more blunt: why should they espouse an identity they know better than their distant American cousins?  After all, unlike African Americans, African immigrants left the continent of their own choice, for their own reasons.

If that wasn’t problematic, consider the most blatantly Marxist of the ideals: Ujamaa, or “cooperative economics.”  This means “To build and maintain our own stores, shops, and other businesses and to profit from them together.”  The building of Black businesses and the cultivation of Black entrepreneurs is vital to their community.  However, the “profiting together” seems out of touch with business today, especially with that great capitalist mantra that the purpose of business is to make money for you.  Looking at successful Blacks in this country, there is little in the way of “profiting together.”  Nor is it always the best path to create businesses that are entirely owned and operated by one race.  Wall Street banks, for the most part, were all-white affairs, and look how that turned out.

In the past 40 years, the world changed, America changed, racial groups have evolved and prospered in numerous ways.  Does Kwanzaa still fit?  If the statistics are correct, Karenga’s celebration has abutted a consumerist and globalized culture that sees identity politics as less of a barrier and more of a point of entry.  The point is to build bridges, not walls, and Kwanzaa grew as a walled fortress of African self-definition in a white world.

For Kwanzaa’s sake, the walls should come down.  It should evolve into a celebration of identity and heritage, but in a larger, non-alienating framework.   Otherwise, many families will choose to leave the dashiki in the closet.