The Complexities of the “Dream” — Quotes by Dr. Martin Luther King, Jr. 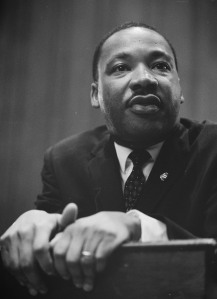 When a person becomes famous, or important, he/she often ceases to have any humanity.

That person becomes marble, a statue, a painting, an inanimate idol to be worshipped and adored like a vacant pagan god.

Yet it is in their complexity that people truly arise as great.  Such is the case with Dr. Martin Luther King, Jr.

Much too often, classrooms distill Dr. King’s legacy into a neat little narrative: The Montgomery Bus Boycott, the March on Washington, the Nobel Peace Prize (and the Letter from a Birmingham Jail, if that teacher’s adventurous) and his assassination.  For must students, King is frozen in time at the Lincoln Memorial in 1963, giving his now-ubiquitous “I Have a Dream” Speech.

Yet the King from 1964 to 1968 is even more fascinating.  The civil rights movement shifted towards more militancy, with Black Power and the Black Panthers.  The Vietnam War moved the focus of many young people towards more radical peace initiatives.  Even Dr. King’s rhetoric had shifted, from one primarily of fighting for civil rights for Blacks to one of social justice and anti-war advocacy.

What follows are a collection of quotes by Dr. King from 1964 to about 1968.  Many of the 1967 quotes come from his “Where Do We Go From Here?” address to the Southern Christian Leadership Conference, wherein the group is re-assessing their mission in the wake of the tumultuous decade.  Notice how Dr. King addresses subjects such as poverty, war, science, black nationalism, and global affairs.

To our ears, these words may seem disconcerting, even radical.  Yet they are important in understanding the path King was to take if he had not met his end by an assassin’s bullet in 1968.

“The ultimate weakness of violence is that it is a descending spiral, begetting the very thing it seeks to destroy. Instead of diminishing evil, it multiplies it. Through violence you may murder the liar, but you cannot murder the lie, nor establish the truth. Through violence you may murder the hater, but you do not murder hate. In fact, violence merely increases hate. So it goes. … Returning hate for hate multiplies hate, adding deeper darkness to a night already devoid of stars. Darkness cannot drive out darkness: only light can do that. Hate cannot drive out hate: only love can do that.”   – 1967

“Many of the ugly pages of American history have been obscured and forgotten. A society is always eager to cover misdeeds with a cloak of forgetfulness, but no society can fully repress an ugly past when the ravages persist into the present. America owes a debt of justice which it has only begun to pay. If it loses the will to finish or slackens in its determination, history will recall its crimes and the country that would be great will lack the most indispensable element of greatness — justice.” – 1967

“I endorse it (banning prayer in public schools). I think it was correct. Contrary to what many have said, it sought to outlaw neither prayer nor belief in god. In a pluralistic society such as ours, who is to determine what prayer shall be spoken and by whom? Legally, constitutionally or otherwise, the state certainly has no such right.” – 1965

“If a city has a 30% Negro population, then it is logical to assume that Negroes should have at least 30% of the jobs in any particular company, and jobs in all categories rather than only in menial areas.” – 1968

“I am convinced that if we are to get on the right side of the world revolution, we as a nation must undergo a radical revolution of values. We must rapidly begin the shift from a ‘thing-oriented’ society to a ‘person-oriented’ society. When machines and computers, profit motives and property rights are considered more important than people, the giant triplets of racism, materialism, and militarism are incapable of being conquered.” – 1967

“As long as the mind is enslaved, the body can never be free. Psychological freedom, a firm sense of self-esteem, is the most powerful weapon against the long night of physical slavery. No Lincolnian emancipation proclamation or Johnsonian civil rights bill can totally bring this kind of freedom. The negro will only be free when he reaches down to the inner depths of his own being and signs with the pen and ink of assertive manhood his own emancipation proclamation. And, with a spirit straining toward true self-esteem, the Negro must boldly throw off the manacles of self-abegnation and say to himself and to the world, ‘I am somebody. I am a person. I am a man with dignity and honor. I have a rich and noble history.’” – 1967

“Don’t let anybody make you think God chose America as his divine messianic force to be a sort of policeman of the whole world.” – 1967

“The problem (of poverty) indicates that our emphasis must be twofold. We must create full employment or we must create incomes. People must be made consumers by one method or the other. Once they are placed in this position we need to be concerned that the potential of the individual is not wasted. New forms of work that enhance the social good will have to be devised for those for whom traditional jobs are not available.” – 1967