In Defense of “The King’s Speech” 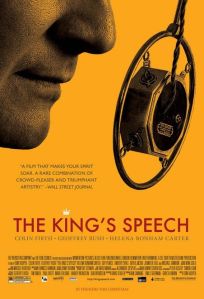 During my winter break, I saw one of the best movies I’ve seen in a long time.

A week later, I saw a review of that movie—from a respectable magazine—that missed the point entirely.

I’m a bit of an Anglophile at heart, and watching The King’s Speech reinforced my love of all things British. Tom Hooper’s magisterial film about the accidental accession—and heartbreaking speech struggles—of George VI (played by Colin Firth) is one of the best films I have seen in a long time. It reminded me of how movies used to be made: with purpose, elegance, painstaking detail and thoughtful gravitas.

As a director, Hooper is already developing a fan base among my students. As the force behind the HBO miniseries John Adams, Hooper gets serious kudos in the classrooms where I integrate his work in my lessons. The direction and lighting of the Boston Massacre scene in the first episode is particularly noteworthy, and gets plenty of airtime with my students.

That said, it was something of a shock when I read Isaac Chotiner’s review of The King’s Speech in The New Republic last week. In a scathing blast, Chotiner dismisses the work as “historically inaccurate, entirely misleading, and, in its own small way, morally dubious.” Specifically, he cites the downplaying of Edward VIII’s pro-Nazi tendencies, the “distortion” of Churchill’s character, and the supposed ingenuous conclusion that “Bertie”, George VI’s nickname, was anti-fascist from the beginning, overlooking political missteps.

Chotiner’s review, apart from dripping with Anglo-hatred and smug intellectual doubletalk, suffers on two points. He is very selective himself of certain historical inaccuracies. Furthermore, in his nitpicking, Chotiner neglects to see the film for what it is.

Anyone can pick and choose the facts that best suit them, and Chotiner gives us a smorgasboard.

Yet the best facts are those that are overlooked.

While Chotiner harps on Edward’s flings with Nazis in 1937, subsequently to be put out of the way as governor of the Bahamas, he neglected to look at things from the German point of view. Hitler, even before Edward and Wallis’ visit, had a fond view of Britain, especially her colonial empire. This was cultivated not by any crowned head, but a former prime minister, David Lloyd George, who visited Hitler in 1935 and had got along smashingly with the Fuhrer.

Looking at Operation Sea Lion, Germany’s presumptive occupation of Britain, supports this view. The occupation had no role for Edward, partly due to his place in the Caribbean, but mostly due to Nazi understanding that more important leaders, such as Lord Halifax, could manage the occupied British Empire, especially her other dominions. Edward’s threat to British liberal government is thus grossly inflated.

Churchill, an early supporter of Edward, also warrants scrutiny, according to Chotiner. Here he bears some credit—some. Winston Churchill was a steadfast supporter of Edward during the 1936-1937 accession crisis, a fact glossed over by the film (although in the film, it isn’t clear at what point in the crisis Churchill discusses the succession with Bertie). Yet although his decision was shocking to his allies, as Chotiner claims, it was not so deplorable to the majority of British voters that supported Edward as well.

Churchill was (gasp!) practicing good politics in supporting the wayward Windsor, even as the political elites in both parties expressed disapproval. Edward, as a dashing force for modernizing and de-formalizing the royal family, was seen as a humanizing force by the British public, who overwhelmingly supported Edward over his stammering younger brother Albert.

In bad taste? Most certainly. Yet Churchill the politician was simply pandering to the electorate, which keeps in line with his political comeback of the 1930s.

Lastly, Chotimer claims that the future George VI was a reluctant anti-fascist, although the film supposedly depicts him as anti-fascist throughout. His evidence is the viewing of Neville Chamberlain in 1938 at Buckingham Palace after the Munich agreement, an agreement that postponed World War II for less than a year.

Show off your own prime minister off a balcony and he’s an appeaser who “violated protocol” in endorsing the actions of a prime minister—which were disastrous in HINDSIGHT?

It’s flimsy, to say the least. And he neglects to paint the same bleak picture when George VI does the exact same thing with Winston Churchill on V-E day in 1945. He certainly endorsed a prime minister then for his foreign policy: shouldn’t he merit the same scrutiny then?

There is plenty of evidence that proves George VI’s loyalty and duty to his people. He worked a remarkable personal relationship with Franklin Roosevelt and his wife during the desperate period of the Battle of Britain. When advisors warned him to escape, George stayed in London with his beleaguered people, enduring blackouts, rations and boarded-up windows at Buckingham Palace (just ask Eleanor Roosevelt when she visited). A German bomb landed on their lawn, to demonstrate the danger. George and his family made a point to visit military bases, towns, bombed-out factories and villages all over the British Isles, even at great personal risk.

That was just during the war. The New Republic being a more liberal tome, it would hearten Chotimer to see George’s early advocacy of racial equality. He was the first royal to play tennis with a black man in 1927 in Jamaica, which shocked local elites as a perceived sign of racial equality. In 1947, in a tour of South Africa, George was appalled when the white racist government insisted that the king shake hands only with whites. He would have none of that, referring to the South African security forces derisively as “The Gestapo.”

In sum, although Chotimer brings up interesting points about the film’s subject matter—even alluding that it would make a superb film—he misses the point entirely, largely due to a bias against royals and for deeper accuracy at the expense of quality filmmaking.

Chotimer remarks, in words dripping with disdain, that

“This heartwarming tale plays out predictably and unsubtly—The King’s Speech is one of those films that is not content to show us a friendship developing over two hours; no, the characters must also tell us how much the friendship means to them.”

Liberals don’t like to be told anything. Heck, I can’t stand being told things myself.

Yet in a vapid cinematic landscape, where amateur directors bend over backwards to be subtle, ironic, and overly symbolic to the point of tedium, we often need to be reminded—not TOLD, but reminded—of the way films used to be made, of heroes and foils, of dark times and heroic deeds that gets lost in the minute inconvenience of fact.

I saw The King’s Speech with my sister, herself a left-leaning liberal with a low opinion of the royal family. We both wept numerous times during the film. She turned to me and asked in the most sincere way, “Where are the people like that today?”

George VI, to be sure, was a reluctant monarch who had his faults and would misstep during his reign. Yet the film was not about his politics. It was not about Edward’s appeasements or his Nazi sympathies. It wasn’t about Winston Churchill. It certainly wasn’t about Hitler.

At its heart, The King’s Speech is not about king nor about any one address he gives. It is about a man with a tough childhood that produced a debilitating speech impediment. He gives up on his improvement until fate, and world events, hand him an enormous responsibility. In building a relationship with his teacher, as well as confronting his own demons, George VI learned to overcome his disability to deliver a message of hope and encouragement to his people when they really needed it.

It’s about how a man from who little was expected could deliver so much to his people.

This is what made George VI among Britain’s greatest monarchs.

It is why I loved The King’s Speech. I only wish that others, especially other writers, felt the same way.

One response to “In Defense of “The King’s Speech””