The Ham-Fisted Problem in the Wisconsin Union Crisis 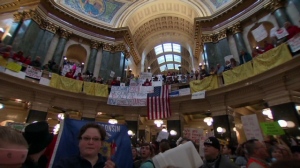 It’s one of many mantras here at the Neighborhood—in a democracy, style matters as much as (if not more than) substance.

We’ve seen it in Obama’s election. We’ve seen it in Michelle Rhee’s unceremonious exit from the DC public schools. We’re seeing it now as Republicans and Democrats are held to a stand-off in Wisconsin over cuts to public unions—and America, as always, is quick to take sides.

Last week, the GOP-dominated Wisconsin legislature began voting on budget measures that would’ve stripped public employee unions of most of their collective bargaining rights, packaging it as a cost-saving measure in response to the current economic condition. The Democratic minority, rather than vote a pyrrhic negative on a rubber-stamp vote, fled the state, leaving the legislature without a quorum.

The Republicans will not compromise. The Democrats, backed by labor unions, will not back down. The state capital of Madison is a war zone with protesters. Similar scenes are playing out in Indiana and maybe in Ohio.

Pundits have, obviously, opined at length on this. Right now, I’m not concerned about the rightward shift in the politics of the Middle West, as many have brought up. Nor am I looking at the declining power of unions as a base of support for the Democratic Party.

What bothers me is the horrible way this situation got to this point. Unfortunately, both sides are to blame.

Back in the flush times, the pre-2008 meltdown days, many state governments, in an effort to cozy up to their public sector unions, proposed contracts that included ludicrously lavish packages: zero-contribution options for pensions, health benefits for nearly nothing, and annuity funds at hilariously high rates. The unions, sensing this was the time to cash in, willfully signed on to these contracts, packaging them as a victory for the members.

Furthermore, in many states, pattern bargaining made the situation worse. Under pattern bargaining, the state’s contract negotiations are based on the precedent of the contracts presented to the other public unions in the state. So if the police and fire unions were rewarded handsomely, then the teachers and health workers want a similar piece of the pie—it’s only fair.

But what happens when the well runs dry?

The economic crisis of state government is a collective problem (no pun intended). It was caused by a severe shortsightedness on the part of governments both state and municipal, both political parties, unions, government contractors and the business sector.

The fundamental rule of the economic cycle is that the good times never last—and when it comes to economics, government is a slow learner.

That being said, the solution proposed by the Wisconsin legislature—backed by Tea Party-aligned GOP governor Scott Walker—is akin to hacking off a limb with an ax instead of a scalpel.

Hopefully, many states are negotiating with their state employees and unions (key word: NEGOTIATING) on creating contract solutions that solve the mistakes of the past. As a unit, unions need to take initiative in preparing their membership for the worst—and proposing austerity packages to the state that are both prudent and self-sustaining at the same time. States, furthermore, must be both blunt in their assessment of the situation to their workforce and open to solutions that can solve the problem with as little economic bloodshed as possible.

Wisconsin Republicans are not doing that. They are out to neuter public unions, once and for all…and it will bite them in the ass.

Regardless of their employer, workers have a right to organize and negotiate with their management. Many people, particularly Jonah Goldberg in a recent Los Angeles Times column, make a distinction between public- and private-sector unions. They see public employees as foregoing collective bargaining for job security—and that the unions themselves are merely a political ploy while the old-guard AFL-CIO unions are more worthy of praise.

Those who make this distinction have a short memory.

What Goldberg and his ilk seem to misunderstand is that public sector unions are not only federal and state employees. The thousands of American municipalities have had workers that fought for their rights well before the rise of government worker unions under the Kennedy administration. Teachers, for example, have fought for better wages and conditions in New York since the turn of the century. Same with police, fire fighters, etc. Many public unions even predate their more “worthy” private antecedents.

Secondly, if the privatization of public services comes to pass, as so many in the right feel must happen, guess what happens to those public unions? They become PRIVATE unions, just like the Teamsters, the electrical workers and so on. The unions will not go away.

Thus, strong-arming basic collective bargaining, even with a working majority, wins no brownie points. Like in economics, in politics the good times don’t last.

The Wisconsin legislature will probably get their vote (even though the courts will weigh in inevitably). The governor may even have his union-busting victory. Now what? How does that make Wisconsin look to other teachers, policemen or government workers who want to work there? Besides a brain drain, Wisconsin will probably suffer shortfalls in hiring, once the economic cycle picks up. Who would want to work in a state that treats them like cattle?

The solution to economic problems is seldom easy and never painless. The state has to be honest about its situation and open to all suggestions—including compromises. The unions have to be upfront with their membership and with management about the sacrifices that need to be made—including compromises. Lawmakers have to find that middle ground that democracy depends on—a middle ground that includes compromise.

If one side refuses to compromise (like in Wisconsin), then short-term victories can turn into long-term catastrophes.

And a final message for Governor Walker: if you insist on treating public employees like cattle to squeeze out a tax cut, go ahead… Just don’t say I didn’t warn you about the stampede that’s coming.