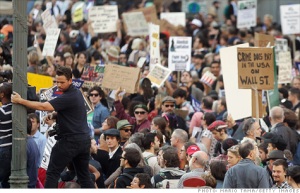 As a born and bred 99%-er, I have spent an inordinate amount of time among the 1%.

Going to college with many of the sons and daughters of the top tier, I absorbed many of the traits, both good and bad, that go with a life of privilege. Exposure to both plenty and want gave me a window into two worlds—and allowed me to view two sides to every social issue.

On the other hand, their carefree and blasé attitude about the world also wormed into my psyche—along with a stiflingly boring Brooks Brothers wardrobe.

As the Occupy Wall Street movement ends the month as a worldwide phenomenon, my two sides are more at conflict than ever.

Usually, throngs of people camping out, chanting, beating bongos and whatnot brings out the 1%-er in me (or at least the 99%er that became a cop). I have an inherent distaste for public disorder, and enough exposure to the powers-that-be to realize that (a) many of their suggestions probably will cause more harm than good; and (b) real power, at least in the 21st Century, rarely lies in the will of the people anymore.

Those who feel that way, mostly on the right (even the Tea Party, which I personally despise) have a point.

Then again, our country was borne out of civil unrest. Disorder was the soil that bore the fruit of the American Revolution. Protest movements have affected American policy from abolition to prohibition to civil rights. Many of the protesters today see an economic situation out of control, spiraling unemployment, and an illogical degree of political power at the hands of a precious few; negating the will of the people.

Those who feel that way, mostly on the left (even the loony Left, which I also personally despise) also have a point.

Yet the headline-grabbing slogans—the ones doing the most damage to the movement—largely do not have a point. Their pointlessness is making a legitimate movement look like a proscribed series of malcontents that habitually pop up upon every bear cycle.

Sorry to burst your bubbles, both Moonbeam O’Ganja and Reverend Cletus Killjoy, but the following will not (and should not) happen:

1. The End of Capitalism – Those who advocate the end of the market system haven’t been looking around lately. Everyone is getting into the capitalist game, for obvious reasons: it is basically how goods and services were exchanged since the beginning of time.

It even goes back to the Bible. As Moses delivers his people to their Promised Land, this new piece of real estate comes with a catch: obey the wishes of a deity that sometimes gets a little too heated for his own good. You can figure out how many times the Israelites broke the contract.

Even the Bolshie stalwarts—old reds like Cuba and new ones like Venezuela—are getting in on the act. Yes, a Cuban can be as capitalist as Daddy Warbucks: simply refusing to do business with American companies does not a Communist make. The capitalist system, in its basest form, is here to say.

2. The Return of Unfettered Capitalism – Let’s get one thing straight: in our country, there never was, nor will there ever be, an absolutely free market. Even Adam Smith himself, the supposed father of modern capitalism, argued that a completely free market was not only dangerous, but theoretically impossible.

The goal is not a free market, but a fair one: a market where everyone plays by the same rules and is governed under similar regulations. If we played by the same rules—and were governed by fair and efficient referees—there would have been no speculative bubbles, no bailouts, no “too big to fail.”

What happened was that the free market forgot how free it was, and decided that it needed to be “freer.” This is a fundamental flaw of the concept: the more freedom you have, the less freedom for those around you. If I had the complete freedom to beat the shit out of someone, that invades the other guy’s right to live peaceably—even if the other son of a bitch deserved it.

Starting in the 1980s, the largest financial and commercial interests in America decided they wanted to beat the shit out of everyone in sight. Certain companies, brokerage houses and banks were allowed to skirt the rules—often by the very governing bodies that made them.

For the wealthy, it means picking up sticks (and Swiss bank accounts) and heading to places where butlers, monocles and teacup poodles are more appreciated (like Greenwich, Connecticut, Bermuda, or certain parts of Switzerland).

For the poor who took the wealth, it means attempting to use the wealth for “the good of all” without succumbing to the inevitable need to line ones pockets. Sure, when you leave a bag of money in a room and you tell everyone “take what you need and leave enough so we can pay the rent”, there’s bound to be problems.

Furthermore, the theft of wealth negates any need to actually create wealth from (gasp!) work. Why do we have to make a profitable business when Mendoza’s old mansion (and his liquor cabinet) sits empty for the taking.

4. The End of Corporations – Here I speak from an all-too-personal experience. My father is the head of a corporation: a corporation of one. If he didn’t incorporate his little upholstery business, my parents would fear for their lives in every down cycle. If he didn’t incorporate his business, that slow year of 2008 could have cost my parents their house and their possessions.

Not every corporation is a multinational Leviathan bent on devouring everything in its wake. In fact, most are struggling to get by along with the rest of us.

If Moonbeam thinks stopping corporate protections will finally kill off Bill Gates, Rupert Murdoch and the Koch Brothers, she’ll also be killing off any vestige of innovation and entrepreneurship in America. The idea of a corporation, a separate entity apart from one’s personal assets, is what makes risk-taking and progressive thinking possible.

Again, this doesn’t mean every corporation acts in our best interest. Nor do corporations always innovate for the better. Henry Ford would probably have preferred paving the streets of Dearborn with the bodies of unionized auto workers (along with some Jews, too, apparently). Always smell for brimstone when making a deal with Donald Trump, Bill Gates or Mark Zuckerberg. This leads to the next point:

5. Complete Privatization of our Government and Society – I have many friends who are Libertarians. I also have many friends who lean towards the Tea Party. They all say the same thing: government is an inherent hindrance to the productivity of business and the entrepreneurial spirit of America. Overheated government spending has produced a debt that seems impossible to pay off. Other countries with fewer scruples than us are surpassing us in all categories. Thus, we must strip our government bare so that the borders are secure, the mail runs (only five days) and the roads are kept up (as long as construction is done on off-peak hours).

I agree that government can be a hindrance to business. The debt is, to be sure, spiraling out of control. However, the complete gutting of our government is not the answer.

Like I said before, the goal is a fair market. That fairness relies on a government that makes and maintains rules that promote growth while buttressing the general needs of society. Someone has to keep the greedier aspects of business in check, while at the same time making sure they don’t go out of business.

This requires a careful balancing act, and to be fair, neither the Tea Party nor the Occupy Wall Streeters are interested in balance. The Tea Party wants a gutted government that supposedly will allow everyone to be rich and buy a McMansion and go to a megachurch to piss away the money we make so the pastor can buy a bigger McMansion far away from us. Of course, this is done while a top-notch military (that accounts for every bullet) patrols every inch of our border while the world blows itself up.

The Occupy Wall Streeters—at least the loudest, most extreme ones—want to gut the top 1% of society to take care of a whole laundry lists of rights and wrongs, from unemployment, national health care, solving urban blight, rural blight, illiteracy, crime, immigration, migration, pollution, carbon footprints, fingerprints, handprints, and a diverse workplace. This while balancing the budget, paying down the debt and maintaining the smallest of military forces that will prop up any democratically “elected” dingdong in any putrid corner of the Third World.

A true solution to our problems—and we do have them—is (I hate to say it) a middle ground between Moonbeam O’Ganja and Reverend Cletus Killjoy. And it’ll be so middle that it pisses off the both of them.

That involves a tax code that makes sense, that makes sure everyone (including the big corporations) pay their fair share.

That involves a painstaking review of our national expenses to see exactly how we spend our money—and take it like a man when the truth isn’t pretty.

That involves regulatory agencies and rules that are fair, balanced, do not stifle the market.

That involves a government that has the balls to do all these things, plus secure our borders and maintain our missions abroad—the ones that actually matter.

If that can’t happen, we’re in for a royal clusterfuck of a future…and no amount of signs, slogans or pack of dirty hippies can stop it.

2 responses to “Thoughts on the Occupy Wall Street Movement”