Now that we know the two finalists for the 2010 FIFA World Cup, let’s get to know one of them a little better.

Of the two (Spain being the other), the Netherlands is probably less known to many Americans, even though our biggest city claims the Dutch as their colonial forebearers.   So it was a thrill to return to my bookshelf and dust off an old gem from my soccer books.

Soccer literature has really come into its own as of late.  A good shelf should include works by Simon Kuper (Football Against the Enemy, Soccernomics, Ajax, the Dutch, the War), Jonathan Wilson’s Inverting the Pyramid, Joe McGinniss’ The Miracle of Castel di Sangro, and of course Nick Hornby’s Fever Pitch.

For my money, few books discuss Dutch football, nor the Dutch themselves, better than Brilliant Orange: The Neurotic Genius of Dutch Football by David Winner.  His 2001 masterpiece about the emergence of Dutch soccer still rings true today, and is required reading for any real fan of the Oranje.

In the postwar period, the Netherlands developed a unique brand of soccer that spread throughout Europe and the world from the 1970s through the 1990s.  Dubbed “Total Football”, Dutch soccer was a strange and exciting blend of crisp teamwork and inventive formations.  It required players to leave their comfort zones and play at positions as the game required: halfbacks shot forward, strikers fell back to defensive play.  It was teamwork and improvisation, stability and movement, stasis and fluidity—depending on the situation. 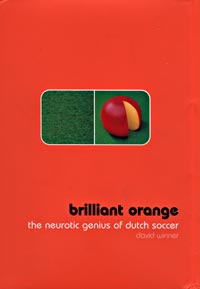 Total Football was, according to Winner, a window of postwar Dutch society; a society which struggled to maintain its identity in the face of the rapid social changes of the 1960s.  Changing mores and a youth culture aching to shake off the violent past collided with a conservative Dutch base that sought stability—sometimes through nefarious means, as exemplified by Dutch cooperation during the Nazi occupation of the 1940s.

Yet I would argue that it is more than that.  Total Football is a reflection of the dichotomy that has defined the Dutch character since the founding of the Republic in the late 16th Century.  To many Americans, the Netherlands is windmills, wooden shoes, booze, sex and drugs: a kind of European Tijuana, where anything goes.  In fact, Dutch identity is not defined by freedom, at least not entirely.  Rather, the struggle between freedom and order has permeated throughout Dutch history, as is clearly evidenced through their revolutionary brand of soccer.

Take, for example, the Dutch attitude toward marijuana and prostitution.   If you asked the Dutch government, they’d probably tell you that they wished both these vices would go away.  Yet if they were both criminalized, it would lead to a rapid decline in social stability.  People want their vices, and will go through whatever it takes to get it: you try prying a pothead away from the mouth of a bong.  So the sensible, orderly thing is to not criminalize it, at least not completely.  Both pot and sex are heavily taxed and regulated by the state, so that both vices, rather than being agents of disorder, are in fact folded into the greater tidiness of Dutch society.

The need for a sensible consensus has driven the Netherlands for over four centuries.  It became a beacon of “tolerance” as waves of refugees, religious dissenters, Jews and political dissidents made the Dutch republic a safe haven and strengthened their trade empire of the 1600s (Note I said “tolerance”, not “acceptance.” These people were accepted out of necessity, not entirely out of kindness.)  This also showed up in Holland’s most famous colony, a ramshackle settlement on the Atlantic seaboard that would eventually become New York City.

This same struggle of order and individual expression shined through the 1970s, as Dutch footballers dominated the sport.  For someone like me, who grew up on soccer, Brilliant Orange is a roller-coaster of both legendary and familiar names.  Names my Dad recognized in the 1970s—Cruyff, Neeskens, Krol, Van Hanegem—were joined in the 1980s and 1990s by players all too familiar to me—Gullit, Rijkaard, Van Basten and Bergkamp.

All of these players experienced incredible success: Ajax of Amsterdam won three European Cups in a row (1971, 1972, 1973), and the national team won the 1988 European championship as well as reach three World Cup finals (1974, 1978, 2010).  Yet the same turbulent society that embraced success also had to cope with defeat, often catastrophic defeat.  For all their success, the Dutch could never win the big trophy, which is also displayed in a distinctly Dutch way: a fatalism that hints that at a return to order.

It’s an interesting thought: is it too disorderly, too chaotic, too non-Dutch for the Netherlands to be world champions?

Today’s Dutch players (Sneijder, Robben, Van Bronckhorst, etc.) as well as fans worldwide will have to contemplate that on Sunday afternoon.  In the meantime, Brilliant Orange offers an incredible glimpse at a unique team, a unique sport, and the bewilderingly unique people that spawned it.

Who am I rooting for?  Let’s just say I’m wearing an orange shirt that day.