A Brief History of Soccer—and American apathy towards it 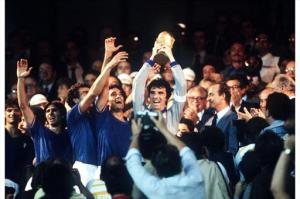 Italy's 1982 World Cup victory. Not that I noticed at the time.

Every four years, thousands of Americans put on the strangest collective theater in history.

They pack local bars, mainly Irish pubs, at ungodly hours of the day (often early in the morning).  Wolfing down English breakfasts of fatty meats and eggs—lubricated with beer—these Americans crowd around TV sets to watch sporting contests from nations they have barely heard of, with players whose names they could hardly pronounce.  By witnessing they’re emotions, you’d think that their lives were on the line.

Yet just as suddenly, when the tournament ends, these very same Americans, so passionate in their allegiance, return to their lives as if the last ninety minutes never happened.

In fact, for the next three years, they even ridicule the very game they enjoyed watching only recently.

Such is the dilemma that is soccer in the United States.

Why, apart from the quadrennial World Cup, are Americans apathetic about the world’s most popular sport?  Is it a lack of a viable professional league in the United States? Major League Soccer, a survivor of a league if there ever was one, still has a long way to go.

Do not enough Americans play the sport?  On the contrary, soccer is one of the most popular participatory sports in America’s schools and colleges.

Is American soccer talent not on par with the rest of the world?  Maybe, some time ago.  Yet today’s national team can go toe-to-toe with just about any other team in the world…and even win once in a while.

Unfortunately, it may still boil down to a worn-out rationale.  Yes, American society as it is does not embrace soccer because the sport is simply very un-American.

Soccer, or association football, developed in Europe (especially Tuscany) in the Middle Ages as an impromptu, vicious game between hundreds of players on mud pits with a misshapen ball to kick, gouge and punch at.  Its violence and chaotic nature caused many states to ban the game, and it remained a localized, “street” affair until the 1700s.

By the 18th century, football had begun a process of standardization, primarily in England.  Rules were established that reduced team size, regulated scoring, and reduced violence severely.  The first professional teams emerged from industrial towns in the mid-late 1800s—towns that are still soccer powers such as Manchester, Liverpool, Glasgow, etc.  The English Football Association (FA) emerged soon after, and the English version of the game spread across Europe, as well as countries with large European immigrant populations such as Argentina, Brazil, Uruguay, Chile, Mexico, and to a small extent the United States.

Today, almost every country in the world has its own professional soccer league, including club tournaments and a worldwide national championship, the World Cup, played every four years since 1930, except 1942 and 1946 due to World War II.

Yet the United States remains an outsider in the soccer world, largely by choice.  If we look at the American sports landscape, we can see why this happened:

Soccer, while so popular in the rest of the world, still lags here because our society has an inherent antipathy towards the game.  In a society forged through brutality, violence, vicious capitalism and ferocious time management, soccer is the most alien of games.

Its insistence on collective play, elegance in movement, lackadaisical timekeeping, and even the irrational emotions make the game seem so…well…foreign.

Even though I grew up with soccer, some of its greatest moments were still foreign to me.

In 1982, I was playing with toys, when all of a sudden; my parents were jumping up and down, screaming and yelling.  Then our landlord and his wife came into the apartment, yelling and waving an Italian flag.  In all the commotion, I decided to jump up and down with them.  We packed ourselves into my dad’s 1975 Ford Grenada and cruised down 18th Avenue in Brooklyn, which was then an Italian neighborhood, and saw what looked like an impromptu fair.  People were dancing, laughing, and waving Italian flags.

I didn’t know what happened.

What did happen was that Italy, Dad’s mother country, just won its third World Cup in Spain in 1982.  I was a kid, so forgive my obliviousness.  Yet I’m not sure I wouldn’t have reacted the same way if I was older.

Will soccer be embraced by America?  Eventually.  Then again, it may need a radical shift in American population for soccer to become an American staple—a shift that is already taking place.  Millions of immigrants from soccer-crazed Central and South America are already in this country, and single-handedly buttressing MLS’ fan base.

Yet what is to say that the next generation will eschew soccer like so many of the past?  I guess we’ll have to see in another four years.

Even though the team took a drubbing this weekend against Notre Dame, and what looks like another tonight against West Virginia, I’m still proud of being a Georgetown Hoya.

I’m working on some curricular stuff this week, so I may be a little more sporadic than usual.  Today is a new video on Hulu, a documentary on Georgetown University’s basketball program on its 100th anniversary, in 2007.  Please enjoy the video, and definitely show it to classrooms where the kids aspire to great heights on the hardcourt. The link is above, as I can’t get the Hulu stuff embedded on this platform.

If you find an unpolished gem I can send to the recruiters, let me know.  Anything to help the program.