This Day in History 8/21: Hawaii becomes the 50th State 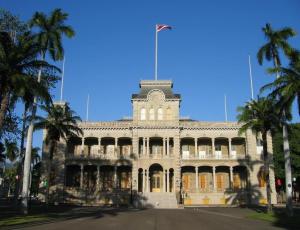 Most of us think happy thoughts when Hawaii is mentioned.  Yet today is a day many Hawaiians mourn rather than celebrate.  Today marks the 50th anniversary of Hawaii joining the union in 1959, and not everyone is happy about it.

Palm trees, beaches, surfing, loud shirts, luaus, hula dancers, an inordinate use of Spam in their cuisine–these are some of the things we consider when confronting our 50th State.  Yet others would also add greed, quasi-slavery, colonial domination, exploitation and fraud, especially in the development of an independent Polynesian kingdom into a territory of the United States.

By the mid 1800’s, a series of American and European settlers, missionaries and businessmen had settled on the Hawaiian islands.  They lived as subjects of the Hawaiian monarchy, yet many of them worked to undermine the authority of native peoples through land exploitation and monetary influence on local politics.  Among these “subjects” was a businessman named Sanford Dole–cousin of the pineapple magnate James Dole–who would play an integral part in the story.

In 1887, the settlers, practically at gunpoint, forced the monarchy to adopt a constitution that stripped the monarchy of much of its power and dinsenfranchising Asians and poor Native Hawaiians.  When Queen Lili’uokalani attempted to re-assert native authority on the island, the settlers overthrew the government in 1893–with not-so-subtle backing from the US military–establishing a “republic” with Sanford Dole as president.  The 1898 annexation of Hawaii completed the conquest, as Hawaii became America’s Pacific outpost for resources, commerce and naval defense.

By 1959, the Hawaii Admission Act was proposed in Congress.  Opposition popped up in all corners: southerners who feared a state governed by nonwhites would flout their efforts against segregation, conservatives that questioned Hawaiian patriotism, red-baiters who felt Hawaii was a Communist haven.  One of the most vocal, though, were the Hawaiians themselves.  Many Hawaiians felt the territory shouldn’t be American to begin with, let alone apply for statehood.  Furthermore, there was a fear that non-Hawaiians, particularly Asians, would control the state upon admission.

Upon passage of the act in March, the referendum was put to Hawaiian voters in August.  There were two options on the ballot: remain a territory or join the United States as a state.  140,000 votes were cast out of about 155,000 registered voters, and 93% of the vote was in favor of statehood.  Less than 8000 opted for the territorial option. 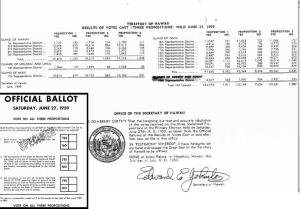 Ballots cast in the 1959 Referendum on Hawaiian Statehood

Yet the independence movement had an ace up its sleeve.  There was no option for independence, an oversight that has fueled the charge that the referendum was illegitimate.  The subsequent anniversaries of Hawaii’s admission have been anything but peaceful.    In 2006, for example, pro-and anti-US demonstrators clashed in Honolulu outside the Iolani Palace, seat of Hawaii’s government.

The state government, meanwhile, has acknowledged the tumultuous path to statehood, recognizing Queen Liliuokalani and other Hawaiian leaders as important in the story of the islands.  They are cognizant of the vocal nature of the independence movement, yet stress the important progress on the islands as a result of statehood.

While the independence movement will probably not succeed (too much is invested in Hawaii for the US to just give it up), its history since the mid-19th century should give pause and allow us to reflect on the meaning of settlement, or establishment.  Greed and exploitation started the path toward statehood.  However, Hawaii is a major destination today, and is a strategic link in the Pacific for American military and diplomatic missions.