Website Review: Mission 2 of Mission: US – “Flight to Freedom” 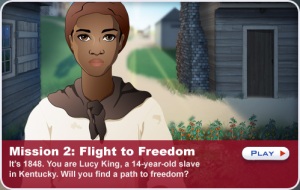 All video game franchises attempt to improve with time. With PBS’ Mission:US, however, the delays were making us question whether there was going to be a second mission after all.

It has been a long time coming, but the second installment marks a solid improvement on the original.

The Neighborhood last visited this PBS interactive history game with its inaugural mission, which dealt with a young Boston boy dealing with the events leading up to the American Revolution. While we found it a worthy start, the mission was somewhat flawed with excessive dialogue, cartoonish, anime-like characters and lack of visceral action.

In this second mission, “Flight to Freedom”, the game moves to the mid-1800s as the slavery issue divides Americans. Lucy is an enslaved girl on the King plantation in northern Kentucky, near the Ohio River and the free state of Ohio. The story follows her daily life on the plantation, assisting fellow slaves escape north, escaping to freedom, being recaptured and sold at an auction, and hopefully fleeing again to freedom. Along the way, Lucy encounters abolitionists, free blacks, other slaves, overseers, haughty masters, slave catchers and others in American society with varied views on slavery.

Many of the flaws of the first mission have resurfaced. The Japanese-like characters and the excessive dialogue have remained. Also, certain aspects of the background seem somewhat sanitized. The slave quarters seem a little too spiffy (they look so well-built they resemble Levittown tract-housing), the fields seem a little too tidy, and the overseer and slave catchers seem a little too diplomatic (I’m sure they probably cussed more in real life).

The choice of crop at the plantation, furthermore, is interesting. Instead of cotton, tobacco or rice, the King plantation grows hemp, a once-valuable crop used in making bags, coarse clothes and especially rope.

I just wonder if my more street-savvy students would snicker at such a harvest, given hemp’s more potent and illegal cousin. Is that Snoop Dogg hanging out a little too long around those burning leaves?

Yet besides the cartoons, the sanitation and the subtle references to illicit drugs, Mission: US’ second mission does have marked improvements on its predecessor.

“Flight to Freedom” now allows the main character Lucy to say and do a wider variety of things. Unlike previous missions, which tend to move the story forward a little too linearly, Lucy can now be sneaky, aggressive, persuasive, obedient…even violent if she wants to. The game allows you to collect badges based on how you interact with characters and the situation. The badges also help you finalize the ending of the story the way you want it to end.

This makes the action more human and realistic—making the story all that more relatable to today’s students. After all, to make all enslaved people and free blacks look and act the same is a gross disservice. These people reacted to their situation in varied ways. It was a fine line between a seemingly obedient house servant and a Nat Turner-like insurrection.

Also, the dialogue is remarkably apt for the period. The first mission had colonists that sounded more like Nebraska than Boston. This time around, you can hear the twangs of the Ohio valley, from the drawls of the Kentucky planters and slave catchers to the Midwest nasal airs of Ohio abolitionists.

Lastly, the developers added a nice feature called Think Fast! About the Past for each mission. It’s a timed trivia game that allows you to learn more background information about each time period. Thankfully, the second mission game includes brutally honest information about the nineteenth century.

No, most northern whites were not abolitionists. Most abolitionists didn’t necessarily believe in racial equality. And life for free blacks in Canada was not exactly peaches and hockey sticks.

I hope in the future, PBS will develop missions with more action, longer plotlines and more realism. Yet “Flight to Freedom” is a great leap forward for the Mission:US franchise and it bodes well for upcoming installments.