Did the Culper Ring get its due? A review of AMC’s “Turn”

From the poster of AMC’s “Turn”

The front of the headquarters of the Central Intelligence Agency (CIA) in Langley, Virginia have monuments to fallen agents, sculptures on intelligence gathering, and a statue of Nathan Hale, the Revolutionary war spy who got caught and hanged in September of 1776.  The fallen agents went down due to numerous factors (possibly including incompetence), the intelligence gathering is nothing to celebrate, especially lately, and Hale is remembered more for supposed valor at the gallows than any real prowess as a spy.

Yet there is little public fanfare for the first successful spy agency in American history.

For most Americans, the recent debut of the AMC series Turn is their introduction to the Culper Ring, a network of spies and couriers that operated in New York City, Long Island and Connecticut during the Revolution.  For me, and anyone who went to school on Long Island, the Culper Ring was part of our common knowledge.  Part of my American history class was devoted to local history, and the Culper Ring featured prominently–I had to memorize the names and roles of Benjamin Tallmadge, Abraham Woodhull, Caleb Brewster and the like.

We even used some of their codes and encryption methods in class–which is especially fun when coding out swear words to your classmates.

Yet beyond the spycraft and 18-century Bond-like gadgetry, the Culper Ring was successful in the quality and quantity of their information (they supposedly discovered the Benedict Arnold betrayal and the British ambush on French troops in Rhode Island) as well as keeping their cover.  The original ring kept their identities hidden to the grave, and most of these identities  weren’t discovered until the 1930s.

This was a story that just begged to be made for the screen, and AMC has done it right, for now, in releasing their story as a series.  Is this new drama worthy of the exploits of the Culper gang?  Two episodes in, the verdict is still out, but the results look promising.

The series is based on Alexander Rose’s book Washington’s Spies and begins in a supposed backwater of the war–Suffolk County, Long Island.  Yet it is here, in the north shore hamlet of Setauket, where the ring begins to take shape.  Benjamin Tallmadge, a Continental major (and Yale classmate of Nathan Hale) recruits his reluctant friend Abraham Woodhull on a mission to transmit information to the rebel base across Long Island Sound in Connecticut.  Woodhull is portrayed as a typical non-committal farmer ala Mel Gibson’s melodramatic Benjamin Martin in The Patriot.  His loyalist (for now) father is the local magistrate and friends with the local commander of the British garrison.  As a struggling farmer, Woodhull just wants to stay out of the way, until events push him towards Tallmadge and rebel espionage.

After two episodes (including a one and a half hour pilot) I can see where the creators are going with this.  It’s great that the show is taking its time in developing the establishment of the spy network.  In real life, establishing confidants, sources and “assets” to “turn” (spyspeak for getting an asset to spy on their side) takes time and dangerous planning.  The show is also accurate in developing the perspectives and loyalties of everyday colonists of the time.  Even among the loyalists, you get a sense that the characters are loyal less out of any sense of connection and more of expediency.  The patriots also seem less like the textbook noble heroes and more human, driven by more tangible needs than simply love of liberty. 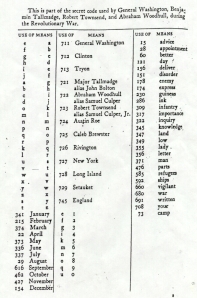 Selections from the Culper spy code, courtesy of the Three Village School District.

Another fun feature of the show is its interactive features.  The Turn website features an option called Story Sync.  Designed to be used simultaneously with the broadcast, Story Sync features information about the historical characters, quizzes, polls, and little asides designed to enrich the experience.  There are also links to interactive maps, spy materials, and other resources that an educator can use.  I already see how these can create a home Blu-Ray or DVD loaded with surprises.

However, the construction of the basic drama, at least now, seems formulaic.  It establishes a clueless British commander in Major Hewlett, a one-dimensional, wooden villain in Captain Simcoe (who reminds me of Colonel Tavington in The Patriot without the charisma), and a somewhat contrived love triangle between Woodhull, his wife, and Anna Strong, a local tavernkeeper who was once engaged to Woodhull and whose husband is in prison for an attack on a British officer.  I will admit, I didn’t read Rose’s book yet, but I do think this romance is more a creation of the screenwriters and less a development of actual events.

In terms of dramatic license, there needs to be some slack given.  Until recently, there was little evidence as to the existence of the ring at all, let alone their day-to-day operations.  So we can forgive the writers somewhat in their zeal to fill in the blanks.

In that vein, Robert Rogers offers a fun way to develop the story.  Rogers, a hero of the French and Indian War and a founder of modern military rangers, had serious legal issues in Britain and returned to America as an erratic alcoholic during the Revolution.  He offered his services to whoever would pay him: first Washington, who (wisely it seems) didn’t trust him, and then the British.  He created another Ranger unit that helped capture Nathan Hale, but Rogers’ behavior got him dismissed the next year, so he probably didn’t have as much involvement in the Culper spy network as the series would like him us to believe.

However, I think Rogers can become the most interesting character in the whole show.

In the series, he is portrayed as a colonial has-been with a hair-trigger temper and a sixth sense for treachery, one who’ll sell his mother for a few guineas.  Of all, I see Rogers as developing into an Al Swearengen type of character: a son of a bitch so ruthless and witty you just have to love him.  The problem with the show right now is that the British are all universally one-dimensional bad guys.  The best villains are those who have something likable about them, and Rogers is definitely someone I would have a drink with.  If Rogers emerges as the main antagonist, this might become a really fun show.

In terms of history, Turn is doing its best with the information it has.  Again, I didn’t read the source material, and once I do, I can make a more informed judgement.  However, as a television show, this has the potential to be fun, exciting and a good starting point in studying espionage in the American Revolution.

If only the show can get away from the cookie cutter formulas, it just might  do justice to an important set of patriots in our history.  Let’s hope the history wins out.

Videos for the Classroom: The Assassination of Abraham Lincoln

Today marks the 149th anniversary of the assassination of Abraham Lincoln.  Maybe outside of the JFK killing, it is probably the most documented single homicide in American history.  It has been written about to death–and also in reel after reel of film.

Sometimes it’s difficult to weed out the grain from the chaff.

Attached is a PBS documentary about the assassination that gives a pretty good primer about the basics: the planning, the conspirators, the moment at Ford’s Theatre and the aftermath.  Just in case the film doesn’t download (as often happens with YouTube) I’ve downloaded a copy: Please email me if you want one.

This Day in History 10/1: The first Tonight Show appearance of Johnny Carson

I don’t usually watch late night television…and mostly because Johnny Carson isn’t a part of it.

On October 1, 1962, temporary host Groucho Marx introduced the new permanent host of NBC’s Tonight Show, a shy midwesterner named Johnny Carson.  For the next 30 years, Carson ruled late night as his own personal empire, and in my opinion, was the greatest late-night host of all time.

Looking back at old Tonight Show episodes, you can see not only how good he was, but how incredibly dumb today’s late-night hosts have become.  Carson was crude, dirty and lewd without uttering a word.  His very mannerisms could cause a filthy snicker.  Carson also had a knack for letting the guests shine, inserting himself only to help the guest or as an affable comic foil.

Most importantly, the guy was cool.  He was real, real cool.  Even with among the most controversial intellectuals of the twentieth century, he was cool.

I attached the first appearance of Ayn Rand on the Tonight Show in 1967.  Rand was invited back two more times to the show.  It’s basically a conversation between Carson and Rand on objectivism, capitalism, rationality…even Ed McMahon joins the conversation.

Forget about your own opinions on Rand: I’m mixed on her, to be honest.  Just name one show on late night today that would have such an intellectual conversation for over 20 minutes of airtime.

…and we wonder why our kids can’t think critically.