Documents for the Classroom: Tom Paine-a-Mania at the Neighborhood 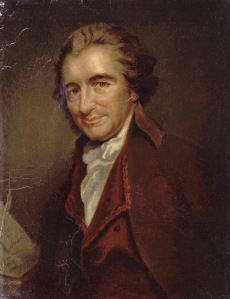 Tom Paine was always a guy I admired: honest, blunt, a professional asshole.

He was also one of the most influential writers of the late 18th century, focusing his pen on the problems of liberty, equality, government and revolution.  As for the latter, he helped push unrest on two continents, and had conservatives across Europe and America shitting in their pants.

The latest post from the Social Studies and History Teachers Blog out of Multimedia Learning focuses on Paine’s most famous work in the States, the 1776 pamphlet Common Sense.  In it, he posits a radical idea: that common, ordinary people have a place in government.  Its ideals still ring true today.

I’m also including links to two other of Paine’s works that may not be as famous as Common Sense, or his subsequent The Crisis here in the US, but are just as important in understanding this important author:

Rights of Man (1791) – Paine’s response to Edmund Burke’s Reflections on the Revolution in France, it is his defense of revolution as a tool for regime change and the protection of basic rights.  It caused a sensation in England, forcing Paine to stay in France and work with the revolutionary government–as treason charges were waiting for him at home.

The Age of Reason (1794-1796) – While in the Luxembourg prison in Paris for opposing the execution of Louis XVI, and seeing the institutional atheism of the Reign of Terror, Paine penned this biting screed that took organized religion in general, and Christianity in particular, to task.  Yet he saw the danger in Robespierre’s authoritarian approach to anti-clericalism, fighting instead for religious liberty.

Enjoy these, and let us know of how you used Paine’s work in your lesson planning.