Cool Link for the Classroom: The Periodic Table of the Presidents

Periodic Table of the Presidents, courtesy of Periodicpresidents.com

A huge thanks to P.J. Creek for sharing his amazing work here at the Neighborhood.

P.J. is an eighth grade social studies teacher and came up with a fun new tool to look at the American Presidency.  Noticing that the traditional flashcards and reference pages didn’t give a complete picture, he decided to borrow from the science department and create a tool that isn’t simply to look at inert gases and carcinogenic radioactive compounds that last a split second.

The Periodic Table of the Presidents is just that: an ordered, logical snapshot of the last two centuries of the executive branch.  It’s numbered 1 to 44, and I don’t have to tell you who’s 1 and who’s 44 (do I really?).  Like the other periodic table, the PTOTP gives each president a two-letter designation, color based on political party, years in office, number of times elected, and other info such as assassinations, resignations, etc.

(Again, do we need to go over who got shot and who quit before they did?)

If it were simply a table, the PTOTP would be a nifty little poster for the classroom.  Thankfully, P.J.’s website includes information on each president, links to further information, electoral maps, a portrait gallery and even his own articles on interesting tales such as “Tecumseh’s curse“, or the death in office of any President elected in a year with a zero at the end (probably since debunked by Reagan and George W. Bush).

You can order the poster for your classroom for 10 dollars–but buy before July 11 and get 2 posters for one.  The PTOTP is a really neat way to explore the American presidency.  It shows the flow of parties, terms in office, important facts and especially how the transfer of power has endured pretty smoothly for two centuries.

At the very least, you can fool all those folks in the STEM departments into thinking you’re teaching science…hey, anything to save a good social studies teacher their job!

Movies for the Classroom: Decisions that Shook the World

“My movements to the chair of government will be accompanied by feelings not unlike those of a culprit who is going to the place of his execution.” ~ George Washington

As many here in the Neighborhood are aware, I am not a huge fan of the policies of President Obama.

However, I do appreciate the difficulties he faces in making decisions that carry far-reaching consequences.  As the above quote suggests, George Washington, our first President, understood this far too well.

In fact, nearly every President since Washington has reached that point: the place where you cannot delegate any more authority, you cannot “pass the buck” any further to a lower-ranking peon.  The President, and only the President, has to make the decision–and people will be unhappy one way or another.

There’s no certainty that the decision he made was the right one.  It may be many years before that decision is vindicated or villified.  Few people can make such leaps in the dark without some sort of mental or emotional breakdown, yet we expect nothing less from our Chief Executives.

I thought about this as I stumbled upon this StarzFilms documentary made in 2004.  Decisions that Shook the World discusses three Presidents who reached a moment of action.  First, Lyndon Johnson, an accidental President thanks to a tragic assassination in 1963, makes a decision to support a Civil Rights bill, even though it meant alienating most of his white Southern base of support.

Second, Ronald Reagan steadfastly supported a “Star Wars”-like missile defensive program called the Strategic Defense Initiative (SDI), even when a Democratic Congress howled at the expense and pundits rolled their eyes at the folly of such a “fantastic” program.

Lastly, Franklin Roosevelt, in the midst of an economic depression in his own country, decides to provide Great Britain with arms and materials before our entry into World War II.  This was at a time when many Americans thought the United States should maintain its neutrality from what seemed to be a mostly European affair.

In each instance, the consequences were felt long after the decision was made.  Johnson, as it turned out, made the right decision on civil rights–albeit the wrong one when it came to Vietnam.  Reagan’s solid approach to anti-Communism helped ensure that the Cold War would end.  However, “Star Wars” opened up the floodgates for massive spending from the Pentagon that we still cannot control.  Roosevelt’s actions kept Britain going until we did enter the war.  Yet the war we initially entered was in the Pacific, with the European war, in the beginning, as an afterthought.

The documentary works well as an episodic series to use piecemeal in classrooms.  It works well with creating “case study” scenarios where students can make executive decisions using the same information available at the White House at the time.

Finally, I hope the film will get students to appreciate the extraordinarily difficult position that the President has.  He has the toughest job in the world, and it gets harder with every passing administration.

A Long-Winded History of Presidential Addresses to Congress 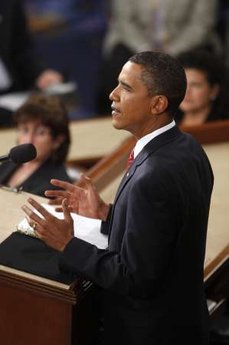 The Presidential address to Congress is the “After School Special” of American politics.

In the course of over two centuries of representative government, the President sometimes summons both houses of Congress to deliver an address that contains a “very special message.”  It usually involves a “national crisis” or an “urgent threat” which “imperils our national character.”  At the same time, the President asks to “stop bipartisan bickering” in order to “find a solution” so that “America can be strong again.”

In the end, we all learned an important lesson (cue the Full House moral music).  Both sides decide to settle their differences.  More often, they wait until the President stops spouting and continue business as usual.  Besides, everyone hated that “Just Say No” episode of Punky Brewster, anyway.

I was thinking about these addresses as I was reading about the hubbub from President Obama’s recent address to Congress concerning health care reform.  You would think that such an address would be effective, considering the exalted office and the rare instance of both houses sitting together.

Giving speeches to Congress is one of the few tasks of a President that is spelled out specifically in the Constitution.

“He shall from time to time give to the Congress Information of the State of the Union, and recommend to their Consideration such Measures as he shall judge necessary and expedient;” – United States Constitution, Article 2, Section 3, Clause 1.

The “State of the Union” is the only speech the President has to do by law, and he doesn’t even have to show up.  Notice that the Constitution doesn’t say “give a speech”, but rather “give to the Congress Information…”  Thomas Jefferson thought giving a speech from the “Throne” was too much like the British monarch opening Parliament, so starting in 1801, he wrote his address to be read by clerks.  This practice continued until Woodrow Wilson reverted to speechmaking in 1913.

Presidential addresses to Congress apart from the “State of the Union” were extremely rare.   According to the clerk’s office of the U.S. House of Representatives, the President has only addressed both houses 61 times in American history.  60 of these speeches were given after 1913.

The first joint-session address was John Adams’ address of May 16, 1797.  He addressed the legislature about the worsening relations between the United States and Revolutionary France.  Since many of the legislators were pro-French, the address fell on deaf ears.  This would not be the first time.  Between 1797 and 1913 not a single speech was made by a sitting president to a joint session of Congress.  Not even Abraham Lincoln—although the guy was painfully shy, so he gets a pass.

The real maelstrom of hot air begins in 1913 with Woodrow Wilson.  The guy had it all: bookish snobbery, rabid racism, and a dipstick diplomacy that opened up for a second world war.  Oh how he shared his book learning with the world: his 18 speeches before Congress is still a record, and it doesn’t even include his State of the Union addresses.  He touched on everything: tariffs, currency reform, Mexican relations (before WWI, the Mexican Revolution was a big problem.  The 1914 message was probably about Pancho Villa alone.), railroad disputes, and of course, that little problem out there called World War I.

Chief executives have been comparatively mum since old Woody left us in 1921.  The following are some important Presidential speeches since 1913.  You can judge how effective they are.

April 2, 1917 – Woodrow Wilson asks Congress to declare war against Germany.  On December 4th, just for good measure, he sneaks a war declaration against Austria-Hungary into his State of the Union address.  You know, in case Germany felt lonely.

January 8, 1918 – Wilson again, this time at his dipstick best.  Here he outlined his plan for peace in postwar Europe: his famous “Fourteen Points.”  When the final treaty came up a couple years later, the Republican Senate, led by Henry Cabot Lodge, rejected it.  This was probably the last time a Massachusetts senator voted against a Democratic President.

February 7, 1923 – Warren Harding addresses Great Britain’s mounting indebtedness to the United States.  This is unremarkable, except to remind Americans when our money was actually worth something.

March 1, 1945 – Roosevelt delivers the results of the Yalta Conference, where FDR feebly called Stalin “Uncle Joe,” while Uncle Joe molested his nephews by keeping Eastern Europe for himself.

January 5, 1957 – Dwight Eisenhower delivers speech on the state of the Middle East.  He says two words: “Fucked up.”  He then corrects himself, “Sorry.  Fucked up royally.”  Ike makes his tee time at Congressional with time to spare.

May 25, 1961 – in his only non-State of the Union speech, John F. Kennedy addresses a host of “urgent national needs,” such as foreign aid, national defense, civil rights and the space race.  He urges speedy resolution, as he senses he’s “on the clock.”  In fact, he’s just being fellated by a stewardess under the podium.

March 25, 1965 – Lyndon Johnson addresses Congress on the passage of the Voting Rights Act.  Southern legislators put fingers in their ears, pretending not to hear.  An hour with Huey Newton and a ball-peen hammer makes them whistle a different tune—and it ain’t “Dixie.”

June 1, 1972 – Richard Nixon reports on his trip to Europe: “Yep, they still hate us.”  Continues covering up Watergate.

October 8, 1974 – Gerald Ford speaks on the economy, learning the hard way that oil-rich Arab sultans do not accept mood rings as collateral.

April 20, 1977 – Jimmy Carter pleads with America to conserve on energy.  Honda, Toyota, Nissan, and Mazda are the only ones who listen.

September 11, 1990 – George H. W. Bush addresses Congress and the nation about the invasion of Kuwait by Iraq.  Bush can’t stand letting that precious crude go to waste.  September 11 passes insignificantly for another 11 years.

March  6, 1991 – Bush comes back to announce that the war is over: he got his crude back.  Good boy, Schwartzkopf.

September 22, 1993 – Before both houses of Congress and with the economy in the shitter, Bill Clinton takes a stab at health care reform.  America goes ballistic and elects its first Republican Congress since the Truman years.  Bill sticks to riding the coattails of a surging tech bubble.  He also keeps his stabbing to young interns from now on.

September 20, 2001 – George W. Bush addresses a shocked nation reeling from the horrors of 9/11.  He announces the creation of a “Director of Homeland Security.”  At first, he wasn’t sure what this meant.  After reading up on Heinrich Himmler and the Gestapo, Dick Cheney got the hint.  He then filled in the boss with the details.

September 9, 2009 – Barack Obama takes another stab at health care reform, with an economy in the toilet and Americans disgruntled at his policies.  Sounds a lot like 1993, doesn’t it?