The Story of Papal Names; or, Why is there no pope named Jimbo?

It’s hard to believe that the supreme pontiff, the personification of Christ on Earth, was once called Fabian.

Some were even Silverius, Soter, Zachary, Hilarius, Conon, Anacletus, two Pelagiuses, and even a Sylvester—three of them.

When Benedict XVI announced his resignation effective February 28th, the Catholic Church reeled in shock, even though his Holiness had been hinting at retirement for some time now.  However, I’m sure the cardinals started jockeying for position once their pacemakers kicked in.  With the doors of the Sistine Chapel closed and locked, the conclave of the College of Cardinals will be busy in their voting, politicking and burning of paper in the process of selecting a new pope.

Since any one of these red-hatted guys can get the top job, they all probably have one thing in mind—what will be my papal name?

Since the 6th Century, almost all popes of the Roman Catholic Church have used a regnal or papal name during their reign.  The early popes, being usually in hiding, on the run, or martyred in an arena in cruel and entertaining ways, really didn’t have much time for picking new names.  Yet the acceptance of Christianity in 313, followed by its adoption as the state religion of Rome in 395, gave the papacy some long-needed breathing room for pomp, ceremony, and especially the affectations of monarchy—hence the papal name.

The first papal name was chosen by Mercurius in 533.  Once he was elected, Mercurius decided to change a really pagan name (he was named after the Roman god Mercury) to the more Christ-friendly John II.  It made sense: There were no Roman emperors named Yahweh or Osiris, either.  This change became more commonplace after the 10th Century, and would be de rigueur for all popes since the 16th Century.

The papal names followed no particular pattern.  Most popes chose the names of predecessors they admired, though some chose names of family members, members, even fellow clergymen who shared their ideas of politics and dogma.  The names cover an amazing range of styles (Adrian, Eugene, Boniface), languages (Alexander, Celestine, Miltiades) and perceived moral attributes (Innocent, Clement, Pius).

Until 1978, all popes picked one name.   John Paul I decided to honor two of his predecessors, John XXIII and Paul VI (which didn’t help him much since he died 33 days later).  John Paul II continued this tradition, yet his successor Joseph Ratzinger went old school with Benedict XVI—a nice touch for a German theologian who tended to always look in the rearview mirror. 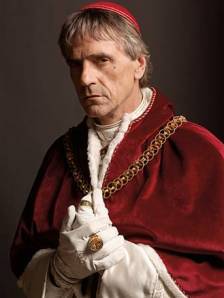 Of the eight Alexanders, most theologians agree Alexander VI was the most ready for premium cable.

Some names just keep coming back: There were 23 Johns, the most of any papal name, with 16 Gregorys, 16 Benedicts, 14 Clements, 13 Innocents (most of whom were probably not true to that namesake), 13 Leos (though not of the zodiac sign of the same name), 12 Piuses (again, you’re just asking for criticism if you choose a name like Pius), 9 Stephens, 9 Bonifaces (an excellent choice of name, in my opinion), 8 Urbans (though none named Rural, oddly), and 8 Alexanders, of which the sixth one you may recognize as Jeremy Irons on Showtime.

Even with the free-for-all in nomenclature, there are some unspoken no-nos.  There is no Peter II, for example.  Peter, as in Peter the apostle, was the first pope, and no one could be pretentious enough to claim they are a second Peter (although Jeremy Irons comes close).  That’s almost as snotty as naming yourself Jesus II; and I don’t have to explain why.

Also, names often go out of fashion, sometimes thanks to one bad apple.  For over 500 years, there was no pope named John.  This was because the last John (John XXIII) was not only an antipope (or false pretender), but he was morally corrupt and such a scheming little shit that even the mention of his name would probably have gotten you excommunicated.  When Giuseppe Roncalli  was elected in 1958, they weren’t sure if he was John XXIII or John XXIV, since that other John carried such a stain.  Roncalli, the kind son of Italian sharecroppers, was no such blight on the name, and took on the moniker of John XXIII, as if the other prick never existed.

So what will the new guy choose?  It’s difficult to say, since rules and fashion continue to shift and change.   For the Neighborhood, we feel the next pontiff might do well to give one of the older, more obscure monikers a try.  We’re not ready for another John Paul.  John, Leo,  Pius or even Benedict (at least now) seems a little safe.

Resurrect old standards like Urban, Boniface, Sixtus or Celestine.  He might even choose Gelasius, Theodore, Paschal or even Zephyrinus.

Whatever name is chosen—in the grand scheme of things, a papal name is not necessarily the measure of a papacy.

Then again, would we ever gain spiritual strength today from a pope named Lando (reigned 913-914)?